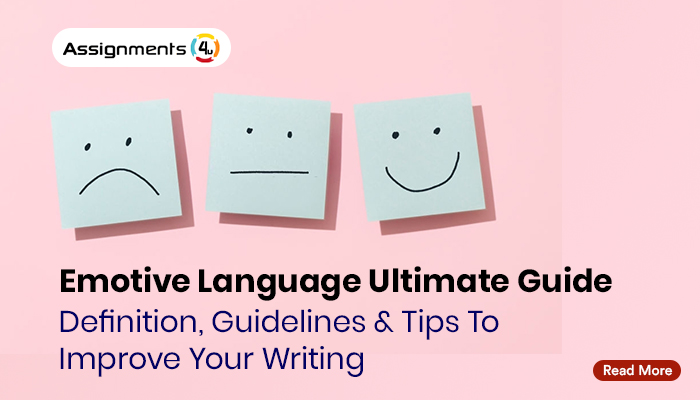 Do you want your readers to show eagerness while reading your writing? The use of emotive language is one of the most important tips. With the help of such language, the writer can bring out the emotions in a reader.

What is emotive language? Emotive language can be defined as words that create emotional responses in the reader, such as anger, joy, or sadness. As a writer, you are constantly trying to find ways to make your writing more engaging. One way is by using emotive language.

How do I use emotive language?

-Avoid using potentially offensive words that could offend your audience or distract them from the point of your writing. Some examples include: “asshole,” “Nazi,” and “retard.”

-Affectively worded sentences should be short with a focus on feelings rather than facts. For example, you might say something like: “I felt shocked when I learned about what happened” instead of “When I learned this upsetting news…” – Use descriptive phrases such as, “it was one of the cheerful points in my life“, or “I’m feeling incredibly pissed off”.

What are some of the examples of emotive language? 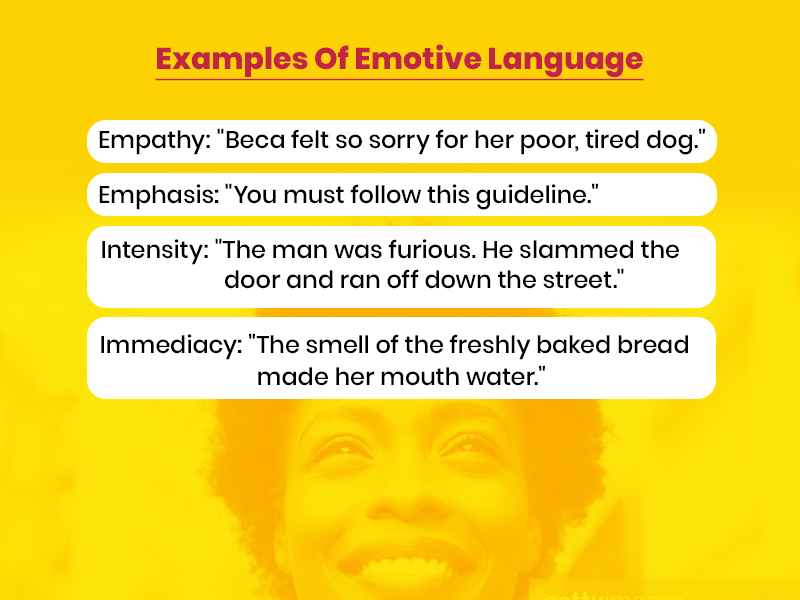 – Empathy: “Beca felt so sorry for her poor, tired dog.”

– Intensity: “The man was furious. He slammed the door and ran off down the street.”

– Immediacy: “The smell of the freshly baked bread made her mouth water.”

Some emotive language listare as follows:

I am so angry! I can’t believe this happened. Why are things like this always happening? Is there anything we can do?” – This is an example of using emotive language to evoke feelings of anger or frustration inside the reader.

“As soon as he sees me walking into the room, it’s obvious his face lights up.” – The word ‘lit’, instead of just lighting up, would invoke a more substantial feeling and be considered emotive language.

It can make your content more potent by using words that evoke strong feelings in the reader. It is especially true for emotive language in persuasive writing! Let us explore some of the advantages that we can have if you are a student and wish to have by using this language.

-Using emotive words helps readers form a connection with you, which in turn makes them more likely to read on or share what they’ve just learned.

– Words that are unambiguous and evocative help readers to understand what you’re trying to say without the requirement of thinking too hard about it.

– Emotive language allows you to paint a picture with words so the reader can imagine exactly how you feel, which helps them empathize with your emotions.

In every piece of academic paper including the essay on Emotive language, the claim is a vital phenomenon. The blog on how to write a claim will give you a complete idea.

For benefits like these, it’s important not to overuse emotive language or use vague wording because then they lose their power and become meaningless. Instead, follow these guidelines when incorporating inspirational words into your work:

– Use emotive language fallacy, as too much can create an emotional overload for the reader.

– Don’t use vague or ambiguous words: they won’t evoke any strong feelings in your readers because they aren’t clear about what you’re trying to say.

– Keep it simple so that the reader knows exactly how you feel and what emotions might be evoked from reading them. Make sure not to overcomplicate things with confusing word choices!

– emotive words can be used in order to evoke certain emotions or prompt action from your audience that they otherwise wouldn’t take. For example, anger evokes feelings of frustration, which might compel others into taking immediate action

– when writing about other people’s work, remember that their passion is what drives them; try using emotive like admiration and hope to get across your respect for their hard work and dedication

Where are the emotive languages used? 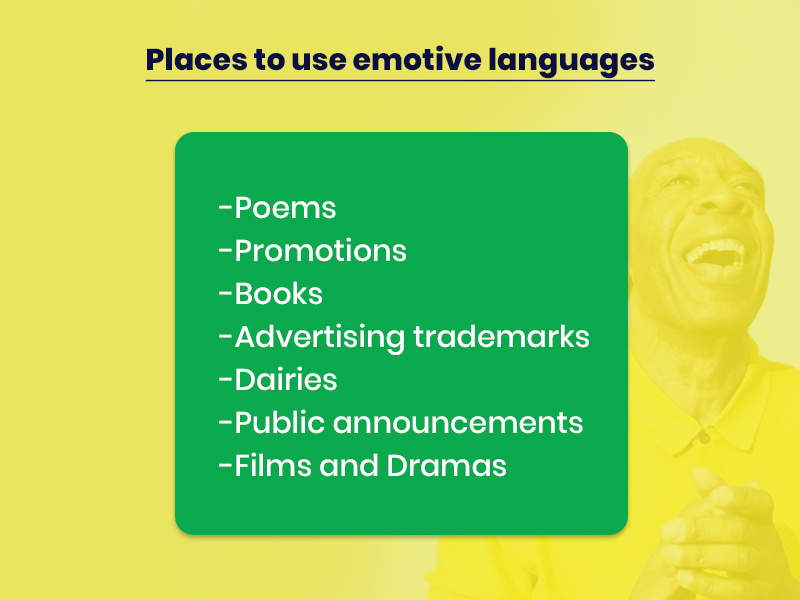 Today, several scholarly gadgets are used in poems. The unified point is passing a feeling in the form of emotions or emotive words.

These days, promotion is important everywhere. Whether it is personal or that of an organization. These are intended to make the people engaged. As a result, people with either avail the service or buy the product.

Several types of stories, novels, and publications are present here. One of the effective biographies is that of Martin Luther king jr. Here, the readers can have an image of the feeling of the readers.

Did you see the marketing themes or mottos? Those are some of the live examples of emotive words or languages. These are meant to win over the heart of the public.

Many individuals keep on writing personal diaries and journals. Those are also some of the wonderful examples of emotive words and sentences. It involves sentiments to grab people’s attention.

Public announcements are declarations that are meant for the general people. The declaration is written in such a way that it strikes the mental balance of the readers. As a result, they immediately change their actions. It can be positive or negative.

The scripts of films and dramas involve the speech and sentences of different characters. Those are related to feelings of love, hatred, hurt feelings—happiness, dream, etc. Thus, the types of emotive languages are much in use.

How can you enhance the skill of emotive language?

The language emotive brings diverse emotional transition among several individuals. For example, an innocent person gets hurt with a harsh statement. Again, happiness gets boosted when some information touches the heart of the reader. One of the issues that many authors face is that they end up with the issue of the right phrase or words that fit the situation.

Thus, the best activity that you can do here is to grow your emotional jargon. You can do this with research and increasing your vocabulary. You can also read articles and blogs that have a variety of useful words. If you are a learner and have an intent to get assignment help on emotive language, just get expert advise.

What is the impact of emotive language on the audience?

Emotive language can help the audience to identify with what they are reading because it is more descriptive. It also makes a stout impact on the reader by triggering their senses, leading them to take action or feel certain emotions. The category of writing can be persuasive and has been shown to have some level of emotional intelligence in an advertisement or article.

A dynamic style of writing can make the reader more receptive to your ideas. The use of emotive words conveys feelings and imparts a sense of urgency or importance (e.g., “Urgent! Sign this petition!”

Wrong use of emotive language and its impact

Some emotional expressions are used too often or wrongly to evoke emotion from the reader; for example, referring to someone as ‘you’ instead of using their name may not have much meaning if it’s done only once or twice. This type of communication breaks rapport because a person feels that they are being addressed by strangers rather than people they know well enough to be called ‘you’.

In 1963, Martin Luther King had presented a speech in public. The theme of the address is ‘I have a dream. Here, the King has used this phrase in a repeated fashion. He also has added that genius comes right from the dynamic approach.

Martin Luther King jr. He was described as one of the greatest orators in history, and his skill with English emotive language was an important part of that description.

An example sentence: “I refuse to have any business dealings with a person who considers me not good enough because I’m black” – Jesse Jackson Jr.

There are many more sentences, but they look better when the blog post content is fully written out.

The use of emotive words conveys feelings and imparts a sense of urgency or importance (e.g., “Urgent! Sign this petition!”).

Why is Emotive language used in literature, real-life, and business?

In literature, emotive language is used to convey feelings like anger, joy, and sadness. It can also be used in persuasive writing or any other type of prose that emphasizes emotions for its reader.Therefore, if you want to know how to use emotive language in your writing, here are our Top 10 rules to improve your assignment in 2021.

Emotive words are usually short such as “hurt,” which carries a negative connotation. In contrast, an emotionally charged word would have more syllables like “delightful,” which has a positive tone about it.

The emotive language connects with the reader’s emotions and makes them feel what is happening in the reading. It can also emphasize a particular emotion that you want your readers to grasp better. For example, if I were writing about my child’s first day at school where his classmates bullied him, I would use emotive language such as “hurtful words once again pierced through me like daggers stabbing into my heart” so that the reader knows how much pain this event has caused me.

It is not always easy to quantify whether an expression of sentiment will have an emotional effect on somebody. Still, there are certain strategies we employ when using emotive language that can help us.

-One way to use emotive language is by personifying objects, animals, and inanimate things such as a boat. Through this strategy, we can give an object or thing enough agency for it to create emotions within the reader, like sadness or anger when something tragic happens.

-Another great technique we employ with emotive language is a dialogue where speakers’ words often reflect their feelings without them even knowing it themselves because they react emotionally rather than thinking about what they should say before speaking, which would be more considered a rational thought process. In my example mentioned earlier of my child being bullied at school, I could have written:

How did you feel after reading this post? Did it make sense to you, or were parts unclear? What expressive language examples stood out for you in the content above? Would you have written anything differently if allowed to do so before submitting your task response here as a draft of what the final product should look like when completed by yourself with guidance from me and feedback from others who will be reviewing these drafts too? Respond with bullet points below.

– I felt enlightened about how emotive language can engage readers into understanding my message without having to expend much energy on trying to figure out precisely what I’m trying to say because it’s simple but obvious.